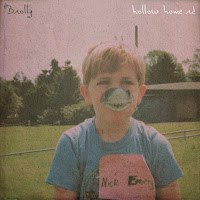 Stumbled across the indie band, Brolly and their album Hollow Home Rd. on Noisetrade. It's a gem of a free download. They have a very memorable sound. I think it's a bit of shoegaze pop with some soft melancholy electro and acoustic tossed in. It's mellow and reflective at times, almost ethereal. Nice arrangements with strings included on several tracks.

They have a show coming up in Mountain View, Ca. on August 31st at Red Rock Coffee. They open for a Bay Area artist named Danielle Young. I recommend checking both of them out.

"Now I am breaking up sand castles under my feet because nothing I build ever made me complete" - Brolly: Dragon Eyes
Posted by Sharkzfan No comments:

I have begun using ifttt as of late. It's an acronym for "If This Then That". It puts the internet to work for you. What you do is create triggers and actions. You automate things to make portions of your technological life a bit simpler. Some of those tasks that you try to do occasionally or even daily can be done for you.

Here are several of my recipes:


I have a number of these different recipe's automating various routines that previously would have required me to take some very specific action (if I remembered to!) My latest recipe is the reason for this particular blog post. When I publish a new blog post, a link to it will also be posted on my Facebook timeline. It takes a bit of tinkering to make some of your recipes work but it's worth the effort.
Posted by Sharkzfan No comments:

I entered another "Trackside with Trains" reader favorites poll from Trains magazine. The theme for this installment was Trains Along the Water. I took this picture in Alviso, a small formerly unincorporated area of San Jose. It was a cool, still, March morning. The water was undisturbed except for the faint steps of a few waterfowl. Their mirrored reflections can be seen in the lower left corner of the picture. Last time I submitted a picture to "Trackside with Trains" back in March it garnered enough votes for a respectable third place showing. I'm crossing my fingers for a slightly better showing this time. I'll update and link when I hear the results. 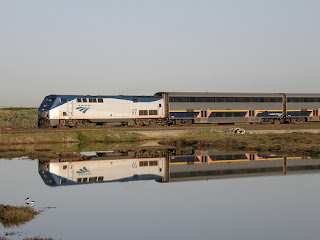 It's been quite some time since I've been out anywhere taking pictures of trains (or anything other than grand kids). I will have to remedy that situation very soon. I need some ferroequinology paparazzo therapy. Update - 6/1/2012 Well this is rather disappointing. I didn't even make the cut. There were three reader submissions, none of which were mine. There's always the next one!
Posted by Sharkzfan No comments:

Recently I submitted one of my pictures to Trains Magazine for their "Trackside with Trains" feature. It's a 'vote for your favorite' kind of feature. The theme was titled "Yellow". The idea is to submit a rail related photo that has something to do with the color yellow. I went through my portfolio and narrowed it down to a couple of pictures. After agonizing over the decision (well, not really) I chose a picture I took in Alviso. My entry tallied enough votes for a respectable third place. 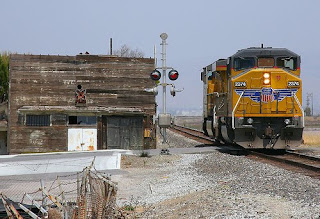 Back in the mid to late 1800's Alviso was destined to be a port city. Shipping from San Francisco and beyond would arrive in Alviso for distribution throughout the south San Francisco bay area. At the time the area was a large agricultural region. However, the hopes of it becoming a booming port city were dashed when the San Francisco and San Jose Railroad bypassed Alviso. The growth in transporting commodities by rail was the death knell for Alviso. The building captured in the image is the former Laine's Grocery in the late 1800's. The building was in use up until major flooding caused severe damage in 1983.
Posted by Sharkzfan 1 comment:

Listening to music is hard work 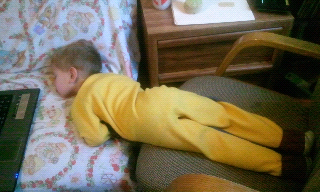 Ethan was listening to his favorite music along with displaying the iTunes visualizer. He was worn out from the days activities and passed out somewhere between the office chair and the futon.
Posted by Sharkzfan No comments:

Brrr....to be cursed to live in California in March. It may be the whacked out People's Republic of California but there are a few perks to offset the madness. Seventy degrees and not a cloud in the sky would be one of them. 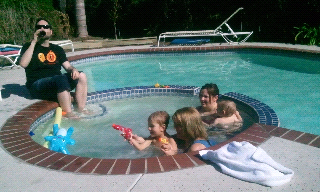 Posted by Sharkzfan No comments:

In the Android App Market

I created an Android application for access on the go to my blog. Now that means all three of you that read my blog will need to be sure to pick up an Android phone so I won't be the only one to have downloaded my own app. For thse of you already clamoring to the market, here is the link. Looking forward to having at least ONE download and maybe a decent review thrown in for good measure. 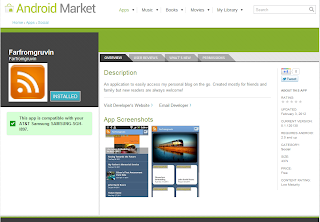 I highly recommend this program. It makes life SO much easier!!